If you’ve been following our progress over the last 12 months or so, you will know that by May of this year we had succeeded in climbing six of the ten mountains we had set ourselves.  Over half way through.  For mountain number 7, we had decided to head up to Yorkshire, where Charlie grew up, to climb one of the highest peaks in the Yorkshire dales.

With Issie boarding, the first time we could get away was just after the schools broke up in early July.  So, that’s how we found ourselves heading up the M1 on a Friday afternoon in July with Ingleborough in our sights.

The summit stands 723 metres above sea-level and is one of the Yorkshire Three Peaks, the other two being Whernside and Pen-y-ghent.

Having posted up on here our plans to climb Ingleborough back at the beginning of the year, we were bowled over with the response from you all.  As the months ticked by more and more emails arrived from friends and family wanting to join us.  By the time the weekend arrive we had a team of 46 people heading up to Yorkshire – some literally flying across the world to join us!

Charlie’s parents took the arrival of the masses totally in their stride.  They found places for everyone to stay, sorted out babysitters and taxis for those that needed them.  And even arranged an amazing post-walk dinner and Sunday lunch in their village…more of which later.

Most people made the trip up north on the Friday evening and we all tried hard not to look at the weather forecast for the following day.  It was pretty apocalyptic – drizzle, turning into heavy rain, turning into thundering downpours.  YIKES!

Having had a wonderful night’s sleep at Charlie’s parents house, we woke up on the morning of the walk to find Charlie’s mum was already super busy cooking bacon and eggs for breakfast.  Meanwhile, Philly was already making picnic sandwiches for half the group!  They might not be walking all the way up Ingleborough with us, but they would make sure we set off well prepared.

There are a number of different ways to climb Ingleborough but the route we had been recommended took in the best points of interest – Ingleborough Cave, Trow Gill and Gaping Gill.  Our start point was Clapham village, just about an hour away over the dales and at 9am on a cold, windy and wet morning we met up with everyone.

Issie and I were completely bowled over at just how many people had made a massive effort to drag themselves out on a precious summer weekend – here we all are at the start looking quite dry!  So many wonderful friends of mine and Charlie’s had joined us – along with their little people – with a special mention for Adam and Taeko (and their beautiful children) coming from as far afield as Singapore.   Very humbling.

I have to admit to a certain amount of nervousness at the start of the walk.  Not only had we jettisoned the use of a guide for the first time, but I had been warned the top of Ingleborough is often a strangely disorientating place in cloud, with people easily getting into trouble in bad weather.  Which we had, in spades!

With so many (very) little people in our group, we set off with the aim of getting as many people as far as possible, but above all to make sure we stayed safe and got back down again!

As you can see from the pictures – there were big smiles all round despite the cold and wet!

The walk to the top of Ingleborough is approximately 8km and we hoped would take about 3-4 hours up and down.  However – we were a very big group and our pace had to take in the racing teenagers at the front and our youngest walkers who were just 2.  We must have looked quite an interesting sight!

The route took us out of Clapham village and up a beautiful track past a farm and down to a river. 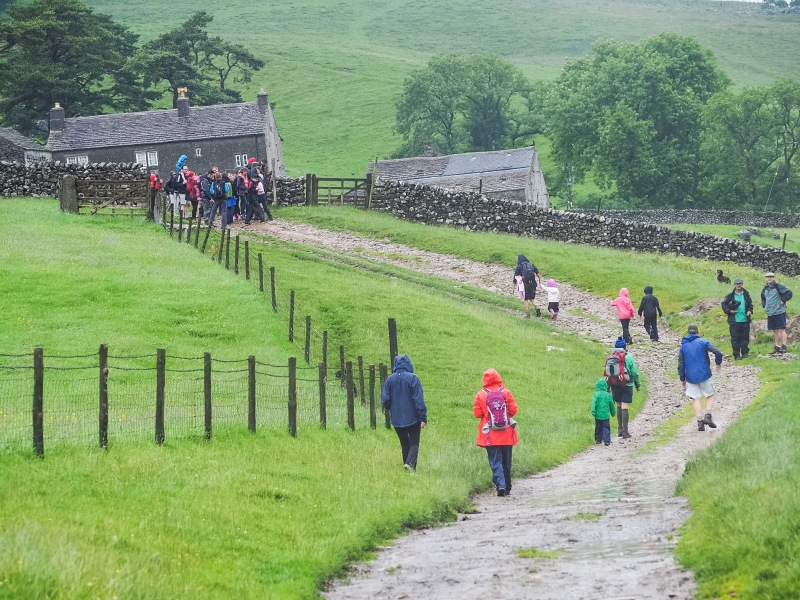 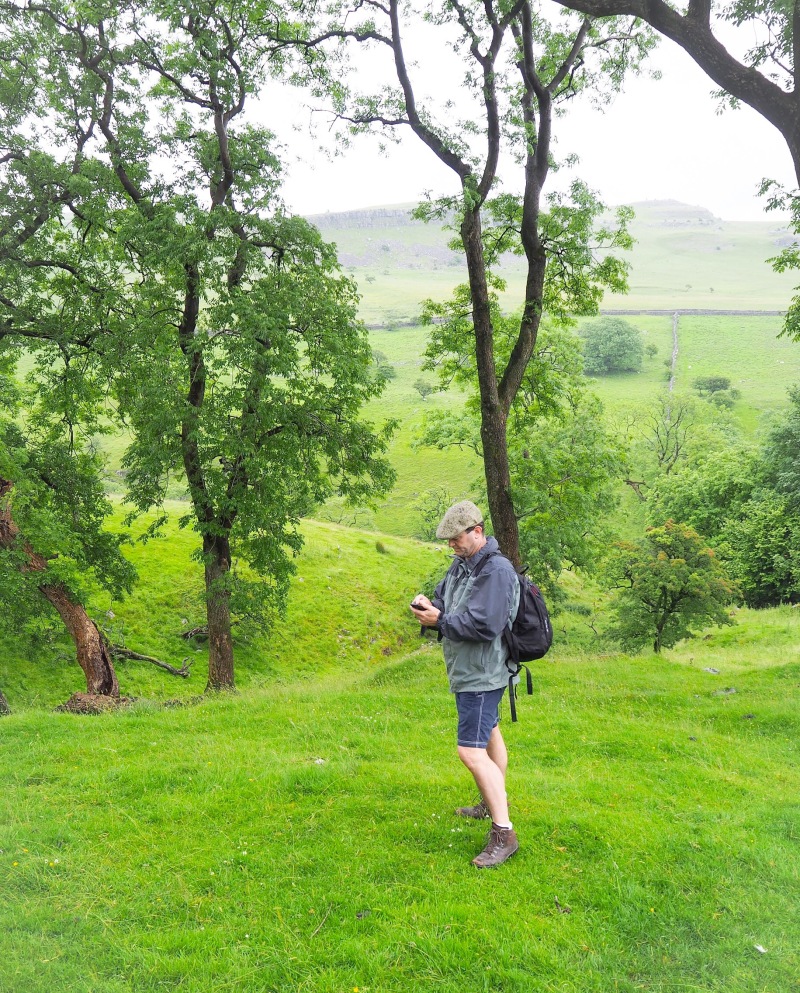 Luckily the rain held off as we started and excitement levels were high as all the children got to know each other.

After an hour though, the weather turned chillier and much wetter.  A decision was taken for an early party (with some of the very littlest people) to return to base and await the rest of us there. 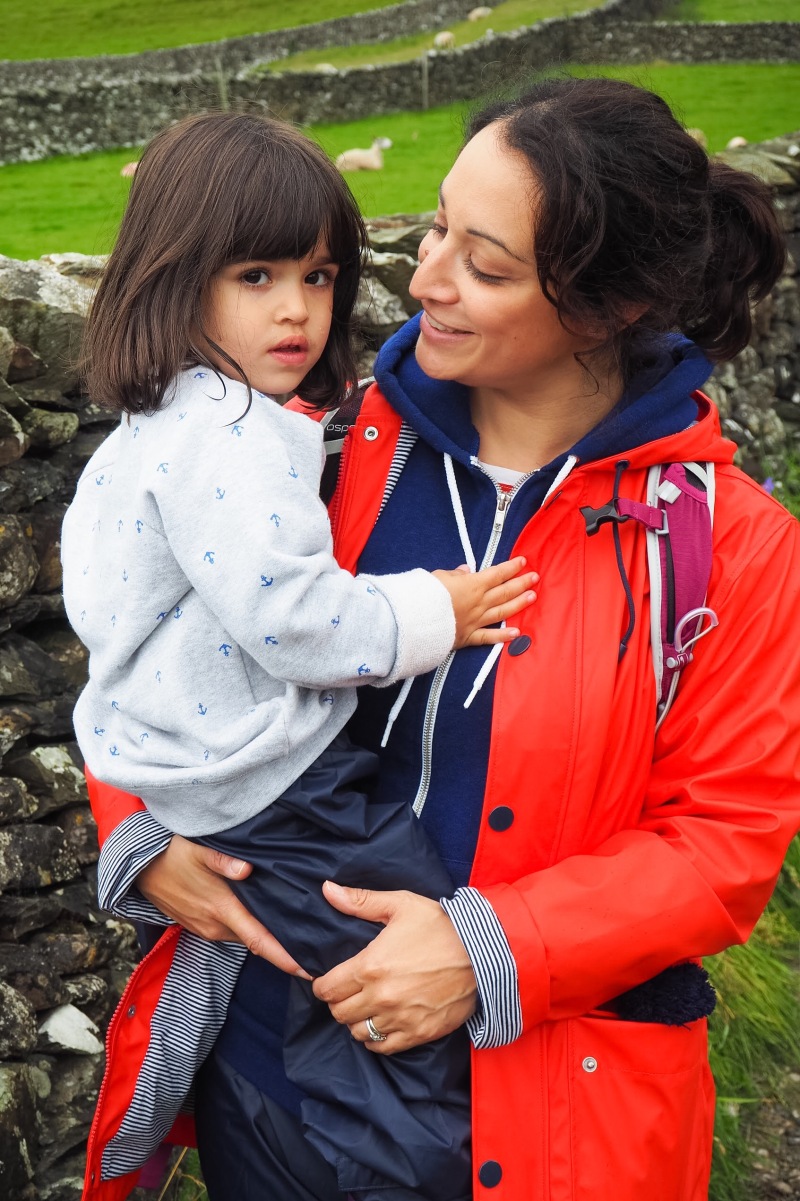 Thanks to some extremely energetic walking/running by the remarkable Philly Hall and Tim Rowell, and some amazing babysitting/cave-dwelling by  Grandpa Andrew and Nikki Hall, our littlest managed to make it as far as Ingleborough caves and then were scooped up for lunch at the pub for the day. 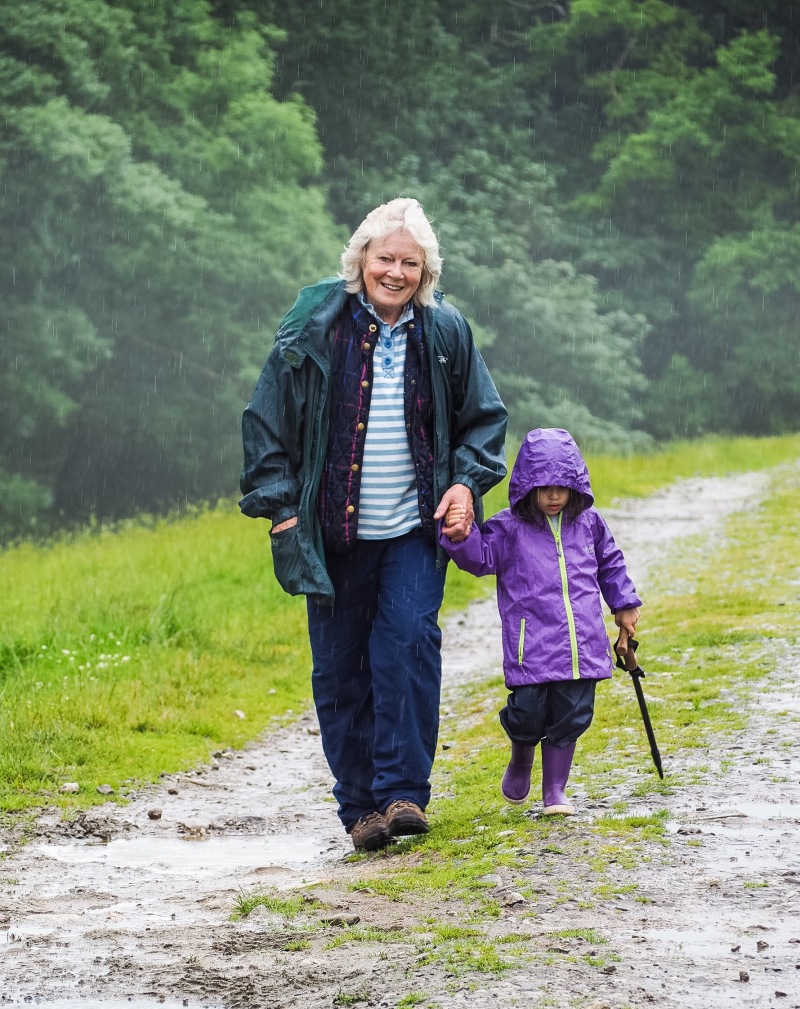 We missed having them all along with us so much, but were thrilled to have them for a little of the journey!

With the older children setting a furious pace at the front, the Elliott brothers and Holly and I were soon running to catch up with them, pausing for some quick pictures as we climbed through the dramatic limestone gorge of  Trow Gill.  It’s a wonderful part of the walk and there is a short scramble at the end, at which point you get the first views of Ingleborough itself.  Quite beautiful  (the gorge, not perhaps the anorak-clad mummies…what was i thinking with those socks?!) 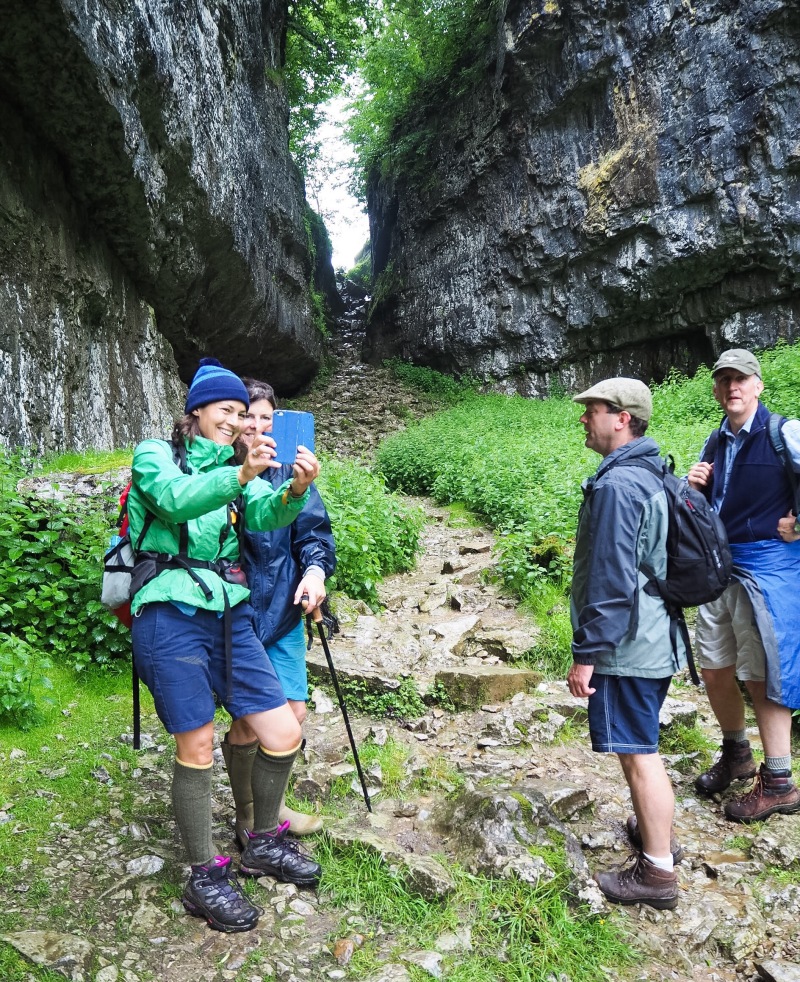 Once out of the Gill, the path took us up onto the open fell and we started to feel the full force of the weather. We struggled on as far as Gaping Gill where we stopped for some lunch and refuelling.

However, as we sat down the rain and mist descended and we had a rather miserable 20 minutes trying to eat some lunch in the thundering rain while trying to keep the children warm.  We thought there were about another 1-2 hours to go and set off again into the mist. 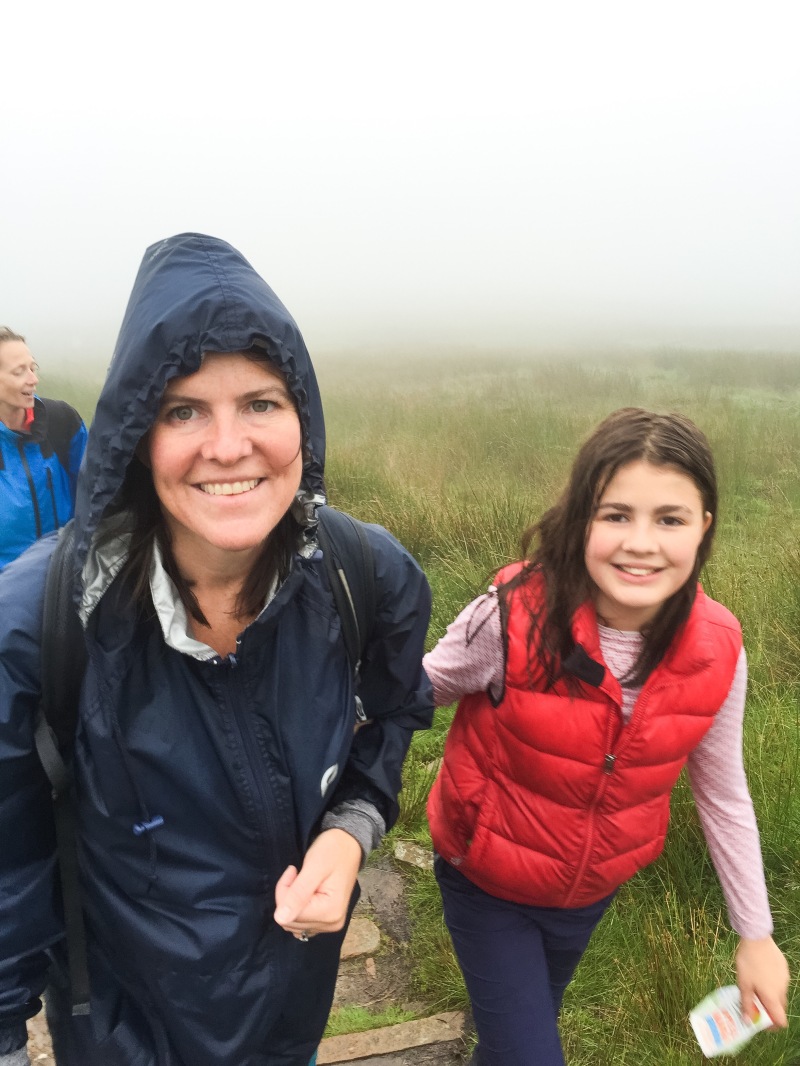 As we made it past Trow Gill, we saw some extraordinary men clambering out of the ground, dressed as if about to set off into space.

There is a shaft that disappears 110m in to the ground at this point on the walk.  It enables you to reach the largest potholing chamber in the UK. Twice a year, pothole clubs raise funds by charging to winch people down the hole.  It wasn’t quite for us today!

As it got colder and colder there were a few discussions had about the best way forward.

We met a group descending who said it was another 45 minutes to the top but that you couldn’t see a thing and it was extremely windy up there.  The children were soaked to their skins and with zero view, anywhere, pushing onto the top in dangerous conditions seemed somewhat reckless. 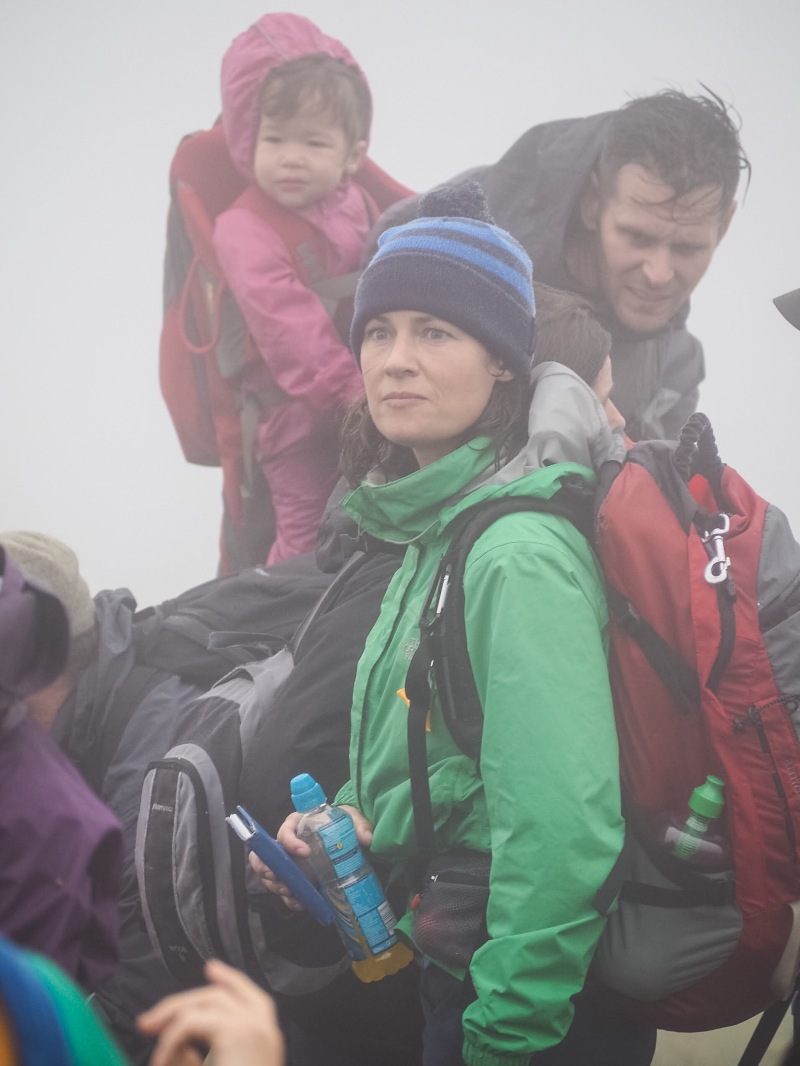 So, with somewhat heavy hearts we decided that  Little Ingleborough would have to be our summit for today.

Charlie would have been the first to have us all back safe and sound, rather than attempting a peak in such awful conditions. We gathered everyone who wasn’t yet sobbing or shaking with cold and clambered up onto a small corrie – we’d made it to just over 610m in extremely challenging conditions – that was enough!*

The walk back down saw the weather lift and morale raised as the prospect of hot chocolates and ice creams beckoned at the cafe at the bottom. 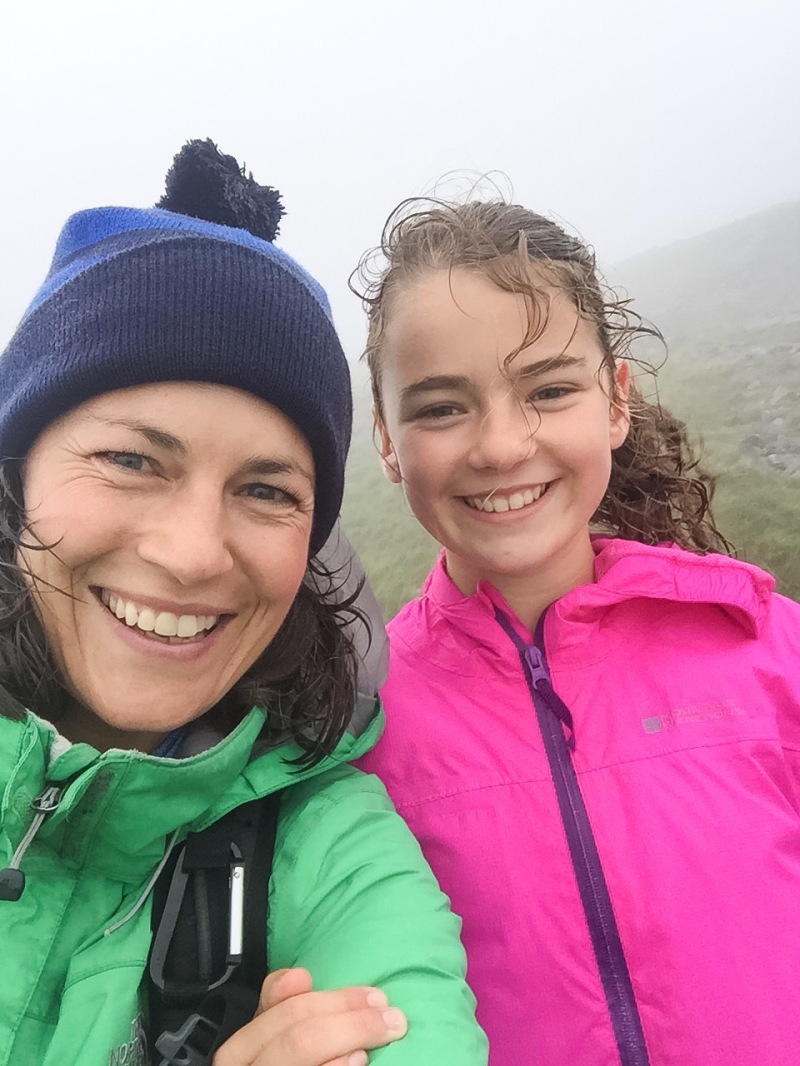 The children seemed to find their batteries restored and soon enough they were charging around, sliding down grassy hills at top speed and chasing each other around the fields as we descended back down the same route to the caves. 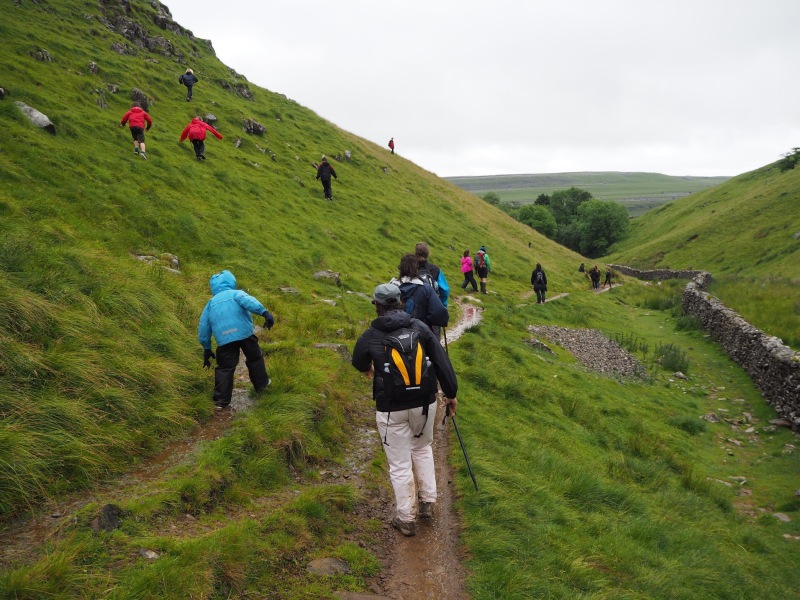 Here is our “survivor” photo (below) at the bottom…somewhat bedraggled, pretty muddy and tired…but still lots of big smiles!   What an achievement everyone! 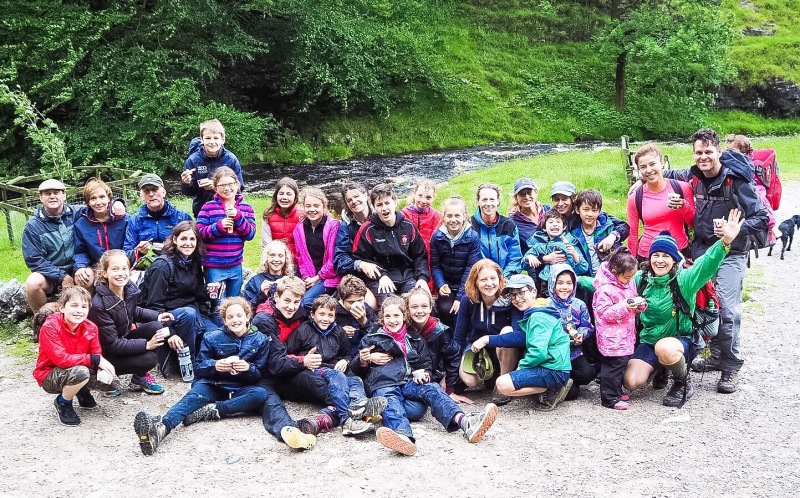 I can’t finish here without telling you about the wonderful and incredibly generous supper Jane and Brian threw for us all at their local pub that night.  Suffice to say a lot of wine was drunk, stories were told, delicious food was eaten and endless games were played in the garden by the children.  Charlie would have ADORED it, as did we all.

But that wasn’t enough, as the sun came out the next day (how is that always the way??) we had a completely glorious lunch by the river in the field near Jane and Brian’s beautiful cottage.

In a wonderful marquee we feasted on delicious food and Pimms while the children tore around, with a little more energy than some of the adults!

Taeko taught the girls to make some completely beautiful wreaths from flowers and much time was spent not-quite-falling-in the river at the bottom of the field. 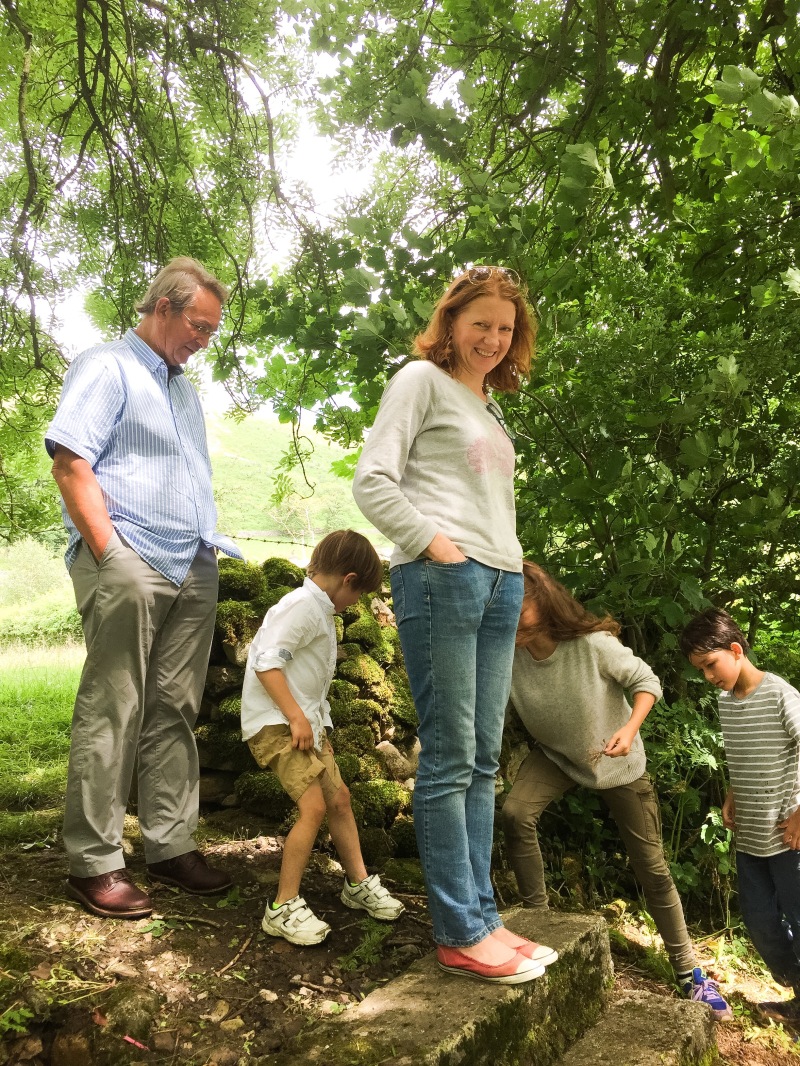 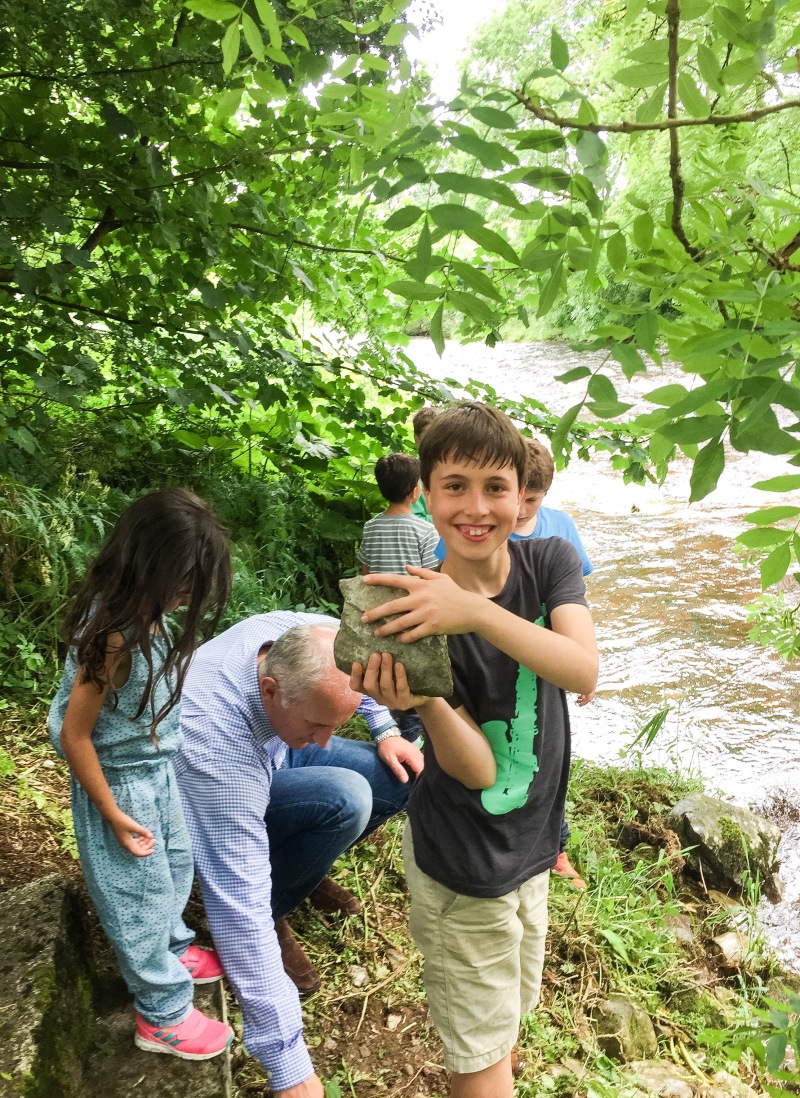 All in all a truly brilliant, brilliant weekend.  What a way to tick off peak number 7.  Hugest thank you’s to everyone who made it up to join us and especially Jane and Brian for hosting us in quite such a wonderful way.  There is no question peak number 7 will go down as one of our MOST CHALLENGING and also one of our MOST BRILLIANT!

*Here in the UK, a peak over 610m counts as a “mountain” so our summit of Little Ingleborough meant mountain number 7 was just that!